It is my desire to improve and grow as an actor that keeps me going.

Known as much for his looks and acting talent as for his professionalism and friendliness; Sami Khan is one of Pakistan’s most successful and popular young actors today. In an exclusive interview for Page 3, he talks to Ally Adnan about his education as an engineer, his acting career, the hostile relationship between India and Pakistan, his brother Taifoor Khan, the Pakistani Cinema, and a lot else.

In a career spanning almost fifteen years, you have worked in a large number of television serials, several feature films and quite a few television shows. What do you think of your body of work?

I think it is good. I have played a large number of very diverse and different roles in my career as an actor. I am proud of the work that I have done as an actor but not entirely satisfied with my body of work. I feel that I could and should have done more in fifteen years, not because I am ungrateful but because I strive for excellence. I have a disdain for mediocrity and tend to hold myself to very high standards. I believe that I acted well in Aisi Hai Tanhai, Be Inteha, Ghar Ki Khatir, Tau Dil Ka Kia Hua, and a few other television plays but feel that I could have done better. I believe that my best work is still ahead of me and, when the dust settles, my body of work will be known for its quality, merit and variety. I do not think that any actor, however great, should ever give in to complacency and contentment. It is important to always want to grow and progress as an actor.  I am determined to always do better with each new project. It is my desire to improve and grow as an actor that keeps me going.

Are you a good actor?

I think I am a competent actor. I take my work seriously and work very hard to deliver good performances. I constantly look for ways to get better at my craft and, whenever and wherever possible, try to learn from others in the field. I would not say that I am smug about my acting skills but I am happy that I have improved as an actor, consistently and constantly, during the last fifteen years.

You enjoy great popularity amongst fellow actors, producers and directors.

Yes, I do. I value the time, money and efforts of others and do my best to never let any of those to go to waste. I show up for work on time. I take rehearsals seriously. I prepare for my roles diligently. I do not throw tantrums on the set. I respect others. I believe people like me for these reasons.

Your elder brother, Taifoor Khan, is a well-known actor. Did the two of you make a joint decision to become actors at some stage in your lives?

Taifoor and I have had a fascination for show business for as long as I can remember but the two of us never made any concrete plans to become actors. Our careers in show business are largely the result of happenstance and came into being independent of each other. He started as a musician and I as a host. Acting came later. We have worked together in many television plays but our careers have followed very different trajectories.

Who is the better actor, you or Taifoor?

I think we are very different as actors. I try to inhabit the characters that I play and use instinct and feeling to bring them to life. Taifoor is more analytical and follows the method to add sincerity, emotion and authenticity to his characters. 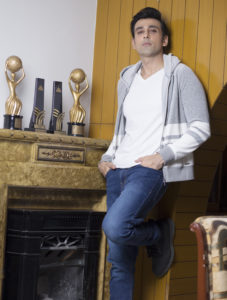 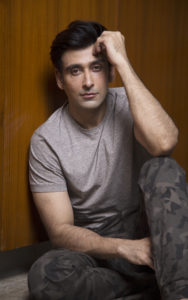 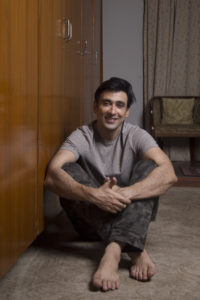 And, who is better-looking?

I think we are both reasonably good-looking men. That being said, I must add that neither one of us values looks, clothes and fashion very much. We have never used looks to establish ourselves in the industry. The two of us are professional actors and want to be recognized for our skill and craft, instead of our clothes and looks.

You studied engineering for four years at one of Pakistan’s finest schools but never worked as an engineer. Do you feel that you wasted your time in school?

Not at all. I believe that the time that I spent at the University of Engineering & Technology, Lahore, was truly wonderful. It helped me grow as a person, gain confidence, develop self-assurance, and become more outgoing than I used to be as a kid. It introduced me to people from vastly different social, cultural and financial backgrounds and made me understand why all of them deserved respect. It was in school that I met people from cities that I would probably never visit in my life and developed an appreciation for religious, cultural and geographical diversity.  The University of Engineering & Technology taught me a lot more than just engineering and, while I may not use my education as an engineer in my acting career, I do use the skills that I acquired in school each and every day of my life.

What are these skills?

The most important ones are people skills. It was in school that I learnt to listen, to communicate, to empathize, and to relate to others. In addition, I developed the skills of logical thinking, time management and organization, along those of writing and speaking well, while at school. Good education affords one a lot of benefits. These can never be overstated.

Your television play Teri Meri Jodi was a joint production of Zee Zindagi and GEO Television. Why was the serial not aired in India?

Soon after the shooting of Teri Meri Jodi was completed, political tensions between India and Pakistan escalated to great heights and the serial became a casualty of strained relations between the two countries.

How did you feel when plans to broadcast Teri Meri Jodi in India were scrapped?

Why were you disappointed?

Teri Meri Jodi was a good serial. I believe that it should have been seen both in Pakistan and India and was disappointed when it was not broadcast in India. I believe that India and Pakistan need to get along with each other and maintain healthy, friendly relations. That does not mean that I do not subscribe to the two-nation theory; I do but I do not think that hostility and hatred are honorable emotions.  The partition of British India into Pakistan and India was necessary. Two states need to accept the fact and move on. India and Pakistan share a common history and heritage. There are a lot of similarities – in food, music, clothes, beliefs, and customs, among other things – between the two countries. And they are independent, sovereign states. There really is no reason for India and Pakistan to not get along and certainly none to hate each other.

Why do India and Pakistan not get along?

I think that a small number influential but irresponsible people, who do not sincerely believe in peaceful and friendly coexistence, encourage feelings of hatred, distrust and enmity. These leaders do not have any plans for the advancement of their nations and try assert their importance by fueling hatred, fear and paranoia. The countries need to focus on real problems – illiteracy, insecurity, injustice, corruption, deprivation, and malnutrition, to name a few – instead of harboring feelings of hatred for each other.

Have you received any offers to work in Indian films?

I have received a handful of offers but none that were very good.

Do you plan to work in Indian films?

Yes, I do. The Indian film industry is very good. I would love to act in Indian films in the future but need to be offered an interesting role in a good film to make it happen.

In your career as an actor, you have focused mainly on television. Do you not like cinema?

I love cinema. I focused on television because, until very recently, most of the films made in Pakistan were of rather poor quality. I did not want to be a part of those films. Now that the Pakistani film industry has turned a corner and is producing good films, I have developed a great interest in working in Pakistani films. I recently worked in Kanza Zia and Ammar Lasani’s feature film Gumm. It has won several awards and is doing very well in the festival circuit.  The film bagged the Best Director and Best Screenplay awards in the London City International Film Festival recently. My next big acting project is a feature film named Kaaf Kangana. It has been written and directed by Khalil-ur-Rehman Qamar and stars Ayesha Omar, Eshal Fayyaz and me. Going forward, I plan to divide my time equally between television and cinema.