The Leading Stars of “Baaji” Do Pakistan Proud at the Masala Awards!

Amna Ilyas and Osman Khalid Butt , the leading actors  of the upcoming film “Baaji” received awards for Agents of Social Change at the  recently held Masala Awards in Dubai.

The star studded, high profile event with an international audience  provided the perfect stage for two of our brightest stars. Their speeches for their awards  garnered praise from everyone , including Kareena Kapoor and other top celebrities from India, Pakistan and the UAE.

Osman Khalid Butt delivered what was arguably the best speech of the night, thanking members of his fraternity who recognize their platform and privilege and use it to promote a stronger, more progressive society. Additionally, he applauded the bravery of all the women in the industry who had the courage to speak up against sexual harassment, and the male allies who also took a stand on this issue. ‘Thank you for choosing to do what is right over what is easy,’ he finished with, eliciting a powerful reaction from the audience. 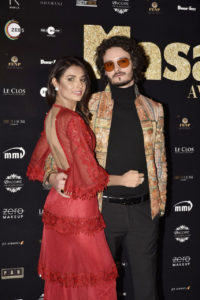 Amna Ilyas , a super model now on her way to super stardom in the film world, also spoke eloquently and passionately, eliciting rousing  applause from the audience . Speaking straight from the heart, Amna dedicated her award to all the girls of Pakistan and encouraged them to follow their dreams and never give up. Amna has always been seen as  an articulate and independent minded member of the fashion and entertainment Industry, making her point of view heard on a range of issues from sexual harassment to  wide scale  discriminatory attitudes towards darker skin tones in the industry.

While both actors were recognised for being  proactive agents of social change, they nonetheless oozed glamour and style. Amna wore a fiery red ensemble by Faraz Mannan, while Osman, who is a style icon himself, carried his custom made jacket by Ismail Farid with dash and panache

Both actors will soon be setting the screen on fire in Ad film and music video director Saqib Malik’s highly anticipated first feature, “Baaji”. Meera, who was very much a part of last year’s Masala Awards, plays the title role in the upcoming social drama.

Both actors promoted  Baaji at the event as well, terming it as a film with a strong social message. All praise to Amna and Osman for making themselves heard where it matters. Audiences can look forward to their on screen chemistry in Baaji, releasing mid 2019

HOW ARE OUR FAVORITE COUPLES SPENDING THEIR QUARANTINE?

« Previous post
5 Things You Might Want To Know About The New Miss World
Next post »
Aiman and Muneeb Finally Got Married Happily. Here is All The Scoop!