Nehr Ghar Films hosted the official premiere of the highly-anticipated crime-thriller Laal Kabootar at Cinepax Cinemas at Packages Mall in Lahore on 19th March 2019 and at Nueplex Cinemas in Karachi on 21st March 2019 to much acclaim. Laal Kabootar has released across Pakistan today, i.e. 22nd March 2019 in collaboration with GEO Entertainment as Channel Partners, FM91 as Radio Partners and Footprint as official distributors.

Indeed, Laal Kabootar has all the elements of thrill and excitement to take the cinema goers to a rollercoaster ride featuring Ahmed Ali Akbar as Adeel Nawaz – a hustling taxi-driver, looking for a way out of Karachi. But with his back against the wall, Adeel has some hard choices to make. Aliya Malik, played by the alluring Mansha Pasha, is strong-headed to the point of being stubborn, however when her world turns upside down in a series of incidents, she chooses to put up a fight even though her life is on the line. With its action-packed sequences and blinding pace, the official trailer of the upcoming movie will take the audiences into the unpredictable world of Laal Kabootar, leaving them wanting more! The film also stars multi-talent actors such as Rashid Farooqui, Saleem Meraj, Ali Kazmi, Shamim Hilali, Akbar Islam, Syed Arsalan, Saad Fareedi, Hammad Siddiq, Ishtiaq Omar, Meesum Naqvi, Faiza Gillani, Mohammed Ahmed and Kaleem Ghour to name a few.

With Mo Azmi as the Director of Photography, Laal Kabootar has been directed by the award-winning Kamal Khan with Harvard graduates Hania Chima and Kamil Chima as the Executive Producers. The screenwriter, Ali Abbas Naqvi, is a Karachi based writer with an intimate take on urban life in Pakistan. With a command over dialogue, Ali Abbas Naqvi pushes the envelope with every stroke of his pen. The Assistant Directors, Zoobia Anwar and Shahrukh Kazim Ali, were the backbone for the Director, always ready to go the extra mile. Zain Khan served as Production Designer and Owais Shamsi as Line Producer. They bravely took on the mammoth task of shooting in over 20 locations in 35 days, spanning one end of the city to the other. Their hard work paid off as they captured Karachi like it’s never been seen before on the silver-screen – sometimes gritty, sometimes glamorous, and always real. Following in his father Rohail Hyatt’s groundbreaking footsteps, Danyal Hyatt has lent his sonic expertise to the score of Laal Kabootar. Fusing classical instruments with modern beats, Danyal will leave you wanting more. The songs for Laal Kabootar have been crafted by Music Director Taha Malik. Not one to shy away from bold strokes, the songs Taha has created for the movie will take you on a thrilling journey. To top off the Sound Team Faiz Zaidi, with 8 feature films in his belt, has captured the pulsating soundscape of Karachi’s city life like never before. Mariam Azmi designed the stunning wardrobe for Laal Kabootar that is sure to evoke in the audience a sense of desire and longing for the characters. A veteran of the industry, she has worked on local and international productions, most notably with Jackie Chan. With Vardah Aziz at her side serving as Associate Wardrobe Stylist for Laal Kabootar, the duo made a killer combo.

5 Most Memorable Songs of The Evergreen Noor Jahan! 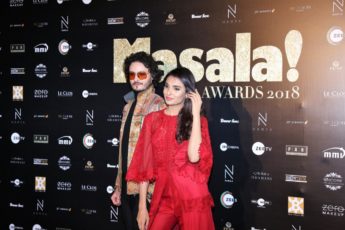 The Leading Stars of "Baaji" Do Pakistan Proud at the Masala Awards!

« Previous post
It’s All About LAWN! – Here Is Our Top Picks For This Season!
Next post »
Lose Weight and Get Smoother with Neem Detox Water