It was a great episode as Ana goes out by herself to find the evidence supporting Agha Jan. When Ana comes across the cottage where they used to live she hears voices of her mother and it is very nostalgic. She calls Nargis Bua to confirm everything but she refuses to tell her the truth. Aina is comforted by Amaan but she maintains distance from him.

She was unable to figure it all out but she knew there was something about that place.  Amaan’s love for Ana is understandable & him not wanting to hurt her more is also justified, but keeping her in the dark that too when she has started to pick up the pieces is not required. Amaan should’ve told her that this used to be her house & that’s where they both met years ago but he didn’t because he did not want to hurt Aina.

ARE YOU WAITING FOR THE NEXT EPISODE? 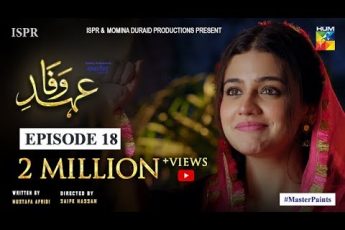 Ehd e Wafa’s Episode 18 Was Yet Another Beautiful and Emotional.

« Previous post
MEHERPOSH – EPISODE 4 – A TRAGIC EPISODE
Next post »
Play and Win from Home: Pakistan’s Biggest Gaming Competition is Back!